After 70 Years,
Zeon Remains Strong
as it Evolves with the Times

Founded in 1950, Zeon marked its 70th anniversary in 2020. Here we introduce the Company's business history and corporate culture underlying its innovative technological capabilities.

Since its foundation, Zeon has steadfastly pursued and applied its innovative, proprietary technologies to product development. It has operated under the philosophy of "identifying customer and societal needs that are changing with the time and leading in the creation of products that address those needs." What follows is a brief review of our corporate history.

Established a GPI process to extract isoprene from C5 fractions efficiently and constructed a GPI plant in the Mizushima Plant in Kurashiki City, Okayama Prefecture. Gained the ability to extract various raw materials other than isoprene using the GPI process. Started manufacturing new materials while developing the C5 business.

1989: Acquired the specialty rubber business from an overseas manufacturer.

Acquired the specialty rubber business from U.S.-based B.F. Goodrich Chemical Company and established its position as the world's top manufacturer based on the high regard for Zeon specialty rubber.

2000: Discontinued the PVC business, which the Company had run since its foundation. Entered the processing field (optical films).

Entered the field of optical films, which no petrochemical company had previously tapped into.
This became a turning point for shifting from general-purpose products to specialty, high value-added products. Paved the way for approaching its current business model, with sophisticated processing technologies, by departing from being a raw material manufacturer.

Accelerated development of single-walled carbon nanotubes, a new material with limitless potential and the benefits of being lightweight and strong and having excellent electrical and thermal conductivity. Established a foundation for the future of Zeon Corporation beyond its C4 and C5 businesses.

2015: Completed construction of a mass-production plant for carbon nanotubes.

Accelerated development of single-walled carbon nanotubes, a new material with limitless potential and the benefits of being lightweight and strong and having excellent electrical and thermal conductivity. Established a foundation for the future of Zeon Corporation beyond its C4 and C5 businesses.

Following the period of manufacturing PVC and then synthetic rubbers, achieved remarkable growth in the C4 and C5 business.

In 1950, just after the end of World War II, Zeon Corporation was founded as a manufacturer of PVC. A technology for manufacturing PVC was introduced from U.S.-based B.F. Goodrich Chemical Company, then a world leader of the industry. In 1959, Zeon started manufacturing synthetic rubbers for the first time in Japan under the technical guidance of the Company. At the time, synthetic rubbers were only manufactured under a public-private partnership established under the Act on Special Measures Concerning Synthetic Rubber Manufacturing Business. Zeon was the first private company to manufacture synthetic rubbers. The supply of natural rubbers completely depended on imports from producer countries in Southeast Asia and other regions. However, the prices of natural rubbers then fluctuated sharply, largely conditional on the weather and political conditions of the exporting countries. The domestic manufacturing of synthetic rubbers was therefore urgently needed for the automotive and other manufacturing industries in Japan.

Once we established a solid manufacturing system for synthetic rubbers using butadiene extracted from C4 fractions of crude oil as a raw material, we took on the development of isoprene rubbers. Since isoprene rubbers with properties equivalent to natural rubbers are highly useful, developing a technology to extract isoprene stably from C5 fractions became an urgent undertaking. As a result of our research, we identified a catalyst for efficiently extracting isoprene. What was more, we succeeded in producing additional byproducts.

In the 1980s, Zeon expanded its business to include petroleum resins and thermoplastic elastomer SIS, which use piperylene, dicyclopentadiene, and 2-butyne extracted from C5 fractions as raw materials. In the 1990s it added synthetic aroma chemicals and RIM molded products to its line-up, and then cyclo-olefin polymers in the 2000s. These businesses now enjoy a major share of the global market.

In recent years, the business of cyclo-olefin polymers, used for optical films, optical lenses, and medical devices, has been growing dramatically. It could be said that the technological capabilities for developing the series of raw materials required in each era has supported the 70 years of Zeon Corporation's history.

Aiming to strengthen its cost competitiveness while building a solid corporate structure, Zeon is conducting "ZΣ Activities" under its ongoing, Company-wide improvement campaign. The "Z" in "ZΣ" signifies the Zeon method, while "Σ" stands for combination, concentration of resources, and Company-wide participation. Zeon Corporation promotes management reform by placing ZΣ Activities at the core of its management system.

In ZΣ, we manage activities by small units called "Organs*" as required and promote activities. For each Organ, we specifically recognize the impact an Organ's operations have on Zeon's management and visualize the Organ's achievements.

The figures that affect corporate management include: "A Values" related to the income statement, "CF" related to the statement of cash flows, and "V Values" associated with potentials such as productivity. We convert all these figures into costs, and we also set account titles so costs incurred by the themes of ZΣ correspond to those of items posted on financial statements.

We work not only to improve the operations of each business division (division-wide optimization) but also to optimize the entire process in the operational flow, viewing all of it as a supply chain. This radically improves our corporate soundness under the philosophy of "regarding the next process as our customer."

4 Logical Problem-Solving and the Full Application of Scientific Methods

To consistently make improvements that do not require organizational changes, by identifying the root causes of problems and taking the appropriate actions, we learn quality control-based problem-solving methods (QC techniques, QC stories, and statistical techniques) rather than excessively rely on our experiences, intuition, and courage. In addition, we scientifically manage business operations using acquired data to achieve improvements.

Since the 1970s, Zeon has been driving the globalization of its business from a global perspective. While establishing its sales network in major countries and regions, it has set up its manufacturing system, focusing on the Elastomer Business. We also operate technical support centers in the U.S., Europe, and Asia in order to respond quickly to local needs. 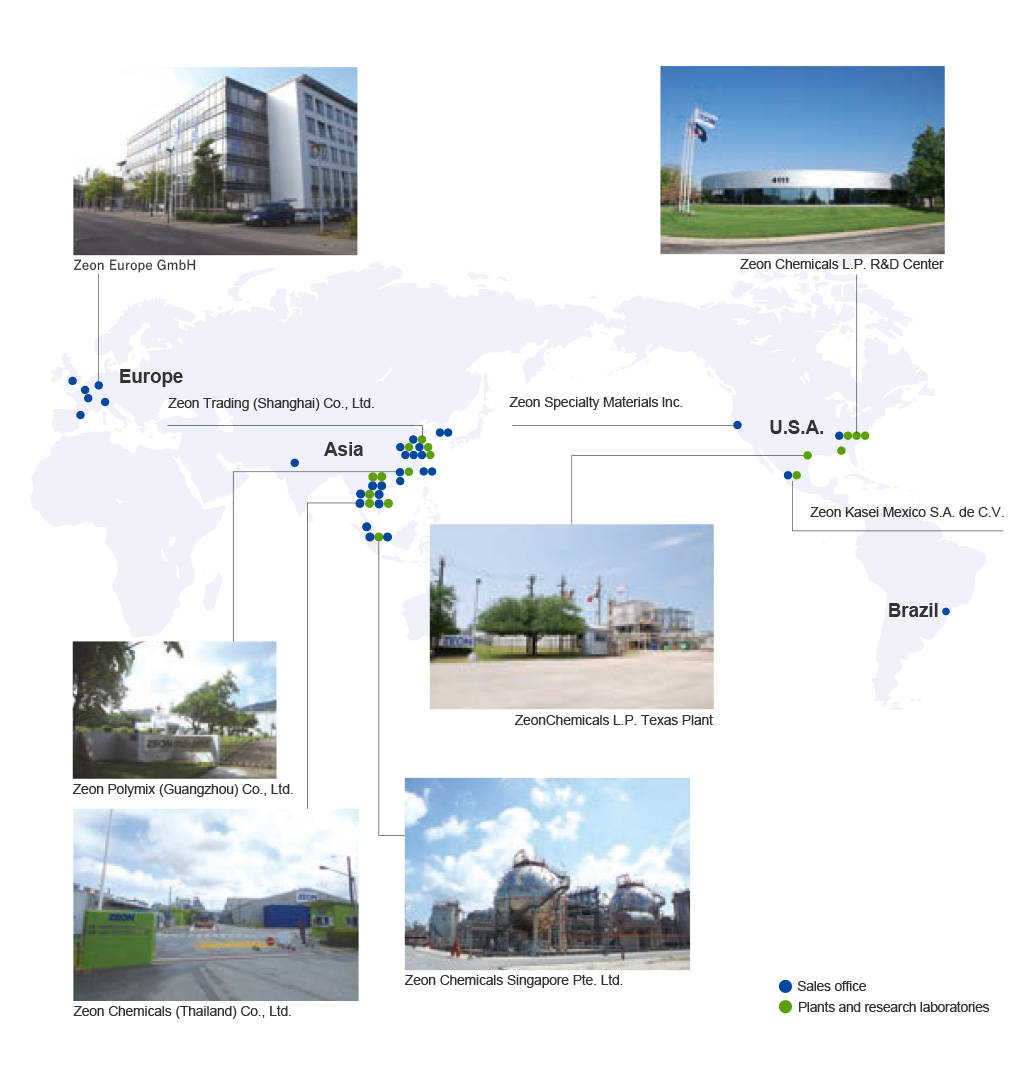 Deals with the sales, export, and import of synthetic rubbers and synthetic resins in Europe. It operates the headquarters in Germany and branches in France, Spain, Italy, and the U.K.

Manufacturing site for petroleum resins handled by the Chemical Business.

Handles the sales, export, and import of synthetic rubbers and resins in China, one of the world's largest markets.

Established in Silicon Valley, U.S.A. in 2017 to sell specialty materials.